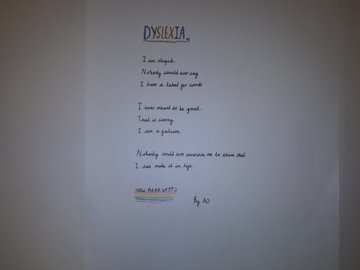 Medical news describes dyslexia is a condition that makes it hard to learn to read and learn. It happens when there is a problem with the way the brain processes graphic symbols.

Dyslexia can be a frustrating and self-esteem diminishing condition for those who live with it – especially when it hasn’t been diagnosed.

One 10-year-old girl has managed to sum up the misconceptions surrounding those with dyslexia, as well as the truth, in a powerful and “brilliant” poem.

UK grade six teacher Jane Broadis shared the poem her student wrote, titled ‘Dyslexia’, on Twitter, where it was liked and retweeted by tens of thousands of people. Jane Broadis was “stunned” by the 10-year-old’s clever way of presenting two perspectives.

The poem is a palindrome, which means that it can be read forward or backwards, line by line.

No one would ever say

I have a talent for words

I was meant to be great

I am a failure

No one would ever convince me

I can make it in life.

The first is a negative view many people living with dyslexia will relate to having held at one time or another. And then, read backwards, it offers a mantra of self-belief.

How to identify dyslexia…

Dyslexia can be conquered….

How to teach dyslexic kids.