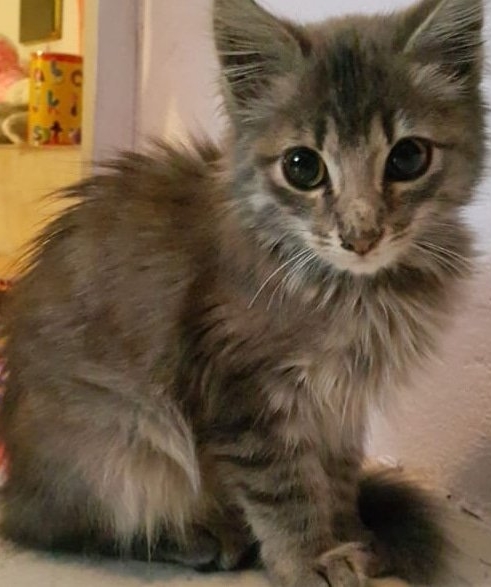 Last week, a stranger made a very dramatic entrance into my kitchen. Skidded in, roared as much as his little body could, inhaled the scents of food, pushed aside the resident kitty and promptly began to devour her gourmet meal.  Dynamite does come in small packages and this little furry kitty was skin and bones and hell bent on eating his little weight in food.  The desperation and hunger was evident in his eyes.

After the excitement died down, the warmly wrapped little kitty, slept in short sporadic bursts.  He was not fully able to relax.  One thing was clear though, he had been cold, starving and surely would not have lasted the cold winter’s weekend.

What was I to do? We already had four kitties, all rescued and I have stray cats in the office complex that depend on me for their meals.  Sadly, I put out feelers and via a trusted kitty carer met Michelle who promised to help home the kitty.

In the interim, my shadow, Leo, my first born kitty moved aside in surprise as the Little One reigned.  Elsa, my last born kitty, bravely tried a few swipes as if to remind the imposter of his place.  Jag, the middle child kitty, sauntered in and looked on in disgust as if to say, “not another one!”

That night, I lay the kitty down on a boxed bed of blankets.  He was having none of that.  He clambered onto the bed and on sure but unsteady feet, made his way to peer at me. Pretending to be asleep, I felt him settle down into the crook of my arm and there he slept for the entire night.  Cautiously, I rose to meet the new day, stepped into my shoe to find that it was full of wee.  My eyes met innocent eyes. Did I imagine a glimpse of mirth in them?  Thankfully, those eyes were not wary of me.   Elsa hopped atop the bed and eyed us suspiciously, having been banned from my/her bed in favour of the kitty’s safety.  Little one was relegated to hiding under the bed or risk being swiped by Elsa’s paw and swishing tail.

Kitty was extracted from his safe corner and placed in the closed bathroom with Elsa guarding him from the outside.  True to her word, Michelle found a home for him but until the weekend, he was to stay with the registered foster mom, Jessica, who we met halfway at a popular mall.  With a heavy heart, I handed over the kitty who had already sensed yet another abandonment.  Jessica immediately put me at ease.  Somewhat comforted that there would be checks on the potential parents and follow up visits, I handed the precious baby over.  Jessica meant to integrate his appearance with the other 7 kitties. Not so. From the promised pictures, I noted that Kitty was with Jessica as she put her two year old daughter to bed.  Kitty had obviously worked his charm as the rules were forgotten in his favour.

Imagine a kitty, probably about seven weeks,  traumatized, cast out, hungry. Desperate.  There was no response to my “Found Kitty” alert and even if the owner came forth, I would have thought twice about handing him over, considering his bony body.  I despair for the human race. The animal abandonment realities are harsh and soul destroying. My sympathy lies firmly with the furry creatures.

It seemed as if every time that we faced an almost insurmountable emotional family hurdle, we collected a kitty.  This handsome baby had found me. I would have loved to keep him. From the Kitty’s fur, he looked to be part main coon and that made him even him more appealing and adorable.  At what costs to the other kitties or to the little one himself?

True to their word, both Michelle and Jessica sent updates on his journey.  Turns out, Kitty’s new Mom dotes on him and is adopted sibling.  Little One has blended in well and seems content in the lap of luxury.  His name is Leo, a name and unknown namesake that fills my heart with joy.  A good ending to what could have been a rather sad turnout.

Steve and Julia , Seems my abode has become a cat feeding station. We discovered another Mom and her kitties taking refuge in the garden. Reclusive and scared, they seem to appear when the coast is clear in search of food and water.  Since she is obviously very protective, we’ve continued to provide meals and helping hands this winter month.

For sure my feline family has grown, abandoned no more, they are our healing friends…