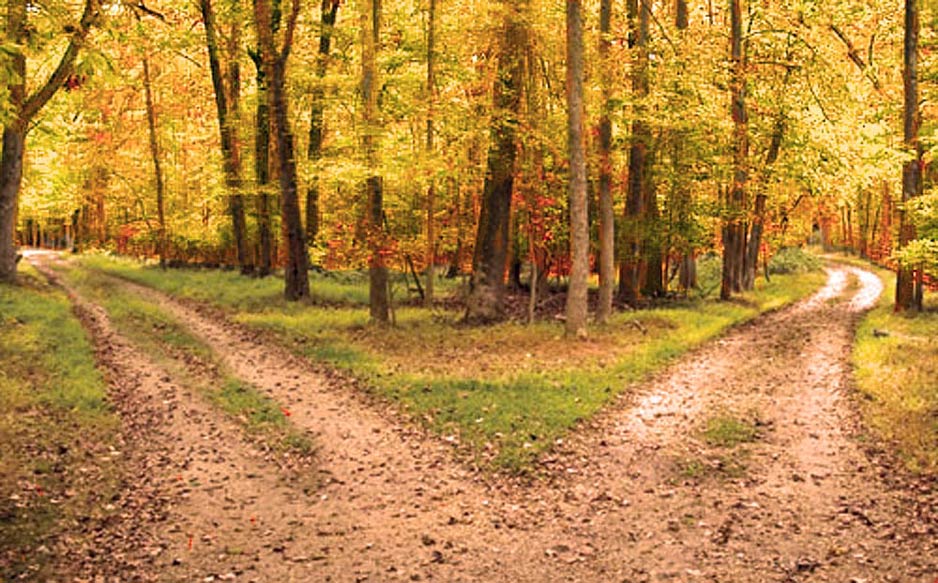 Two roads diverged in a yellow wood,
And sorry I could not travel both
And be one traveler, long I stood
And looked down one as far as I could
To where it bent in the undergrowth;

Then took the other, as just as fair,
And having perhaps the better claim
Because it was grassy and wanted wear,
Though as for that the passing there
Had worn them really about the same,

And both that morning equally lay
In leaves no step had trodden black.
Oh, I kept the first for another day!
Yet knowing how way leads on to way
I doubted if I should ever come back.

I shall be telling this with a sigh
Somewhere ages and ages hence:
Two roads diverged in a wood, and I,
I took the one less traveled by,
And that has made all the difference.

Robert Frost’s “most famous and celebrated poem” captured my heart as a scholar. Mind you, it was read to us by a teacher who was passionate about English literature.  This teacher set out to convince his students that English poetry was marvellously moving and I was enraptured, in the poem, poet and the narrator (who became my first crush and the epitome of high standards), but I digress…

As the words flowed then, I felt myself transported to that autumnal wood and could feel myself weighed by indecision. Which road? What would guarantee the better output?  Years later, I invited that same teacher to my wedding and he was appalled at what he perceived to be, a wrong decision.  A decade later, we met again and I felt that mental sweeping evaluation and grudging approval.

Often, we are at crossroads in life and ponder the dilemmas. The fact is we do not know.  What we need to do though, is make a choice, is take the road, chance it and make that road work for you.

As a person who loves road-tripping, with a husband, just as passionate about road trips, we take the roads travelled but are also very partial to those off the beaten paths and were richer for it. Not many people understand it and we were slated for it, we worried less about their reactions and finally ceased explanations.

We went, we saw, our hearts were conquered.  Again, very symbolic in the manner of choosing our pets, we chose the runt of the litter, the rescues and strays and had added such value to our lives. The point being, we made a choice, decisions that we made work for us and are grateful, richer and blessed for it.

PS,
Did you know that Robert Frost’s personal life was beset by grief and loss. He lost his Dad at 11 to tuberculosis, his mother to cancer. It is said that the Frost family suffered from depression. Only four of his six children survived whilst his wife developed breast cancer and passed quite young of heart failure. No wonder he was able to plumb the depths of his soul to write so realistically of rural life that he had to have escaped into for peace of mind.  Such was the success of his work that he received not one but four Pulitzer Prizes for Poetry and became known as one of America’s rare “public literary figures, almost an artistic institution.”

53 thoughts on “The Road Not Taken”