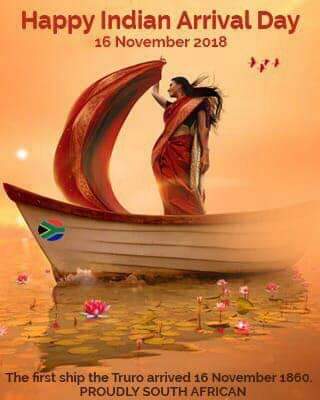 158 years ago, Indian history began in a new way when the first (notarised) Indian people arrived in South Africa on board the “Truro” from Madras (Chennai). Indentured labourers, 197 men, 89 women and 59 children arrived to work in the sugar cane plantations in what was then Port Natal.

The second ship, the “S.S. Belvedere” brought labourers from Calcutta (Kolkata). Thereafter other ships followed as the British were forced to import workers from India as the South Africans refused to work on fields and as the Indians were from British India and required no passports, recruitment was easier.

The journey was by no means easy.  Circumstances were tough on land, some treatment almost inhuman but their will was strong and they found a way to co-exist.  The working contract lasted five years, inclusive of wages and a return passage home.  The demand for labourers increased into the railways, coalmines and sugar sectors.  At the end of their tenure, most returned to India. Those that remained behind industriously built their own homes and places of worship.  Their Kavady festival was dubbed the “marigold festival” and the Mohurrum Moslem festival, the “Indian Xmas” by the white settlers.

“Special servants” arrived to work in tourism and entertainment.  Seeing the opportunity for growth and improvement, “passenger” Indians arrived for business ventures.

158 years later, our city of Durban of has the highest population of Indian people outside of India and is known as Little India.  South African Indians honour their “African Indian Odyssey” with festivals and pride.  Today especially, in honour of our stalwarts and pioneers, many have made efforts to dress traditionally as a mark of respect and celebration.